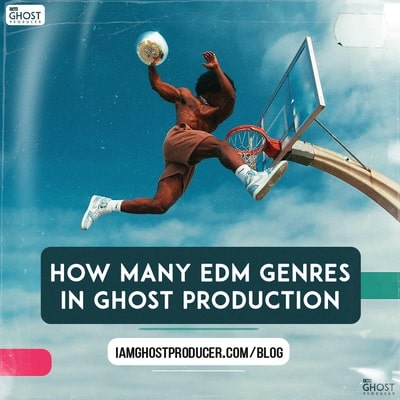 How Many EDM Genres there are in Ghost Production

How many genres are there in ghost production?

There is no clear number of genresin ghost producing. Ghost platforms analyze what is bought from them more often, what sells better, and styles of tracks that are posted more often. It is very important to post those styles of tracks that a client is more interested in.
As for our platform, I am Ghost Producer has 36 different styles. Here is aweb pagewith a full list of genres.

Does a track genre influence its chances to be sold?

It definitely does. There are styles that are more popular among clients. Some styles are less popular, and there also are underground styles. The tendency is constantly changing. Something that was popular six months ago is no longer relevant. Success in sales is influenced by the quality, idea, and also style. A popular style still doesn’t guarantee you that the track will be sold 100%. Sometimes the tracks you don’t count on get sold..

Why is one genre more in demand than the others?

Everything depends on the trends in EDM culture. A new artist with a new style appears. They become popular, and so does the style. Many people want to imitate it. They think that if they use the same genre, they will also become popular. But this is a trap. It doesn’t work. For example, Martin Garrix became famous very fast. Many people tried to copy his style and ideas, but very few could reach success. Martin was the pioneer, a Christopher Columbus of the EDM world. The inventor will always be more popular than the ones who copy. But as soon as a new artist shows up, many people follow the new style, hoping that their music will be in demand too. But the demand leaves as quickly as it comes.
Another vivid example is the recent David Guetta. A new Future Rave style appeared. So everyone started making this style of music and buying it.  It had been at the peak for a while, and then it started disappearing. Music is constantly changing, just like life. One style is popular today and tomorrow it’s gone. Unfortunately, it is impossible to say that a certain style will always be popular.

Genres that are in great demand on our platform nowadays

The first ones are Techno and House Music. Next, Deep House and Big Room. Bass House is often bought. There is also a great demand for Future House. These styles are now in major demand at our platform. But still, other genres are also being bought from time to time. Sometimes both Afro House and underground styles are sold. We have very different clients, and they are looking for different music. Each client has their own taste requests.

How to find out which styles sell more often on the platform?

Go to theSHOPpage and take a look at the tracks that are marked “SOLD”. There is a note about the style under each track. We are planning to make style statistics in the future. We will provide producers with it so that everyone can see how many tracks in each style have been sold over the last six months. This will help producers make their music in demand.

Summing up, we would say that there are a lot of styles in EDM nowadays. What’s popular and what’s not changes from time to time. New producers appear from time to time and they present new masterpieces and new directions in the music world. They have followers and this expands the number of styles. Selecting the genre is important for the ghost platform. Before accepting a track, the chances of it being sold have to be assessed. Tracks in popular styles have higher chances. The genre matters to the producer too. Making underground music means taking a risk. A trendy genre gives you a higher chance of success, but at the same time, it is not an absolute guarantee.