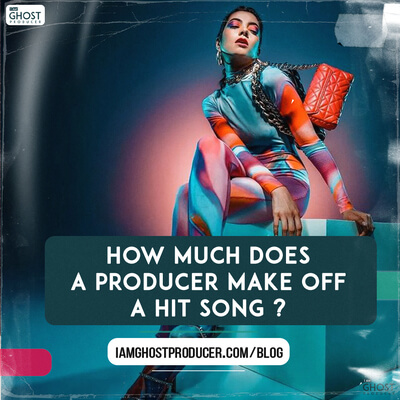 How much does a Producer make off a Hit Song

The income of a music producer depends on many factors and components. First of all – from his knowledge and experience in music production, understanding of trends and laws of the industry. The more experienced such a producer and the more successful songs he has, the more money he is willing to pay for his work.

The personal qualities and experience of such a specialist are only part of the picture and earnings in the future may also depend on how successfully the song created by him will be sold and what places in the charts it will occupy. In fact, the further fate of the producer’s creation depends on a completely different team. The good news is that if a track becomes a hit, then the producer may receive additional benefits from the song’s performance.

Let’s take a closer look at what “hit” actually means and what factors influence the success of a song.

What is a hit song?

Just because a song is good in itself does not mean that it will take first place in the charts. There is a lot of work behind this to promote the future hit, as well as a share of luck and coincidence. It so happens that due to the fact that the song was used in some kind of video or in a movie and after that the song became very popular. In any case, marketing is indispensable here. and they need to be practiced until the listener realizes that this is a really good song and now it will be played on repeat. This is how it works.

The role of the producer in making the hit song

Let’s return to the question of who creates such hits and how much our producer can get for a good song.

Let’s start from the very beginning, so that newcomers can also understand for themselves what path awaits them, what opportunities and potential earnings they can count on. As in many other creative spheres, the work of a producer in the initial stages can discourage the desire to do this business: it will seem to you that you are not moving anywhere, and for the first 1-2 years you may not even make much money. The fact is that during this time you learn a complex craft, gain experience and get to know the industry and people. Only after some time will you have the first results that you can really enjoy.

So, let’s move on to perhaps one of the most interesting questions: how much can a producer earn, especially if the song he has created becomes a hit?

How much does a producer earn?

As of 2021, a producer earns on average about $ 50 thousand. This amount will change every year and mainly depend on the producer’s experience, connections and the place where such a specialist works. Major label producers who work with famous artists definitely make a lot more money.

If a famous artist is signed to a major label, the producer can get up to $ 90,000 for a track produced. In addition, the producer can receive a fee for each track, somewhere between 2-4%. If a song becomes a hit, that’s a pretty decent income.

If a producer works with indie artists, the numbers are very different. The producer can charge from $ 250 to $ 2,000 for each track, and there are no additional commissions involved.

As we mentioned above, the main factor that influences a music producer’s income is, of course, his experience. If you have an impressive number of artists with whom you have worked (including big names) in your portfolio, the value of your work rises several times.

Your height can also largely depend on your communication skills. The more you make and maintain relationships, the more opportunities and chances you have for career advancement, and the more likely you are to work with the most famous artists.

In which city do you think the producers get the most? According to statistics, Los Angeles music producers receive about 20% more than other cities. If you get the opportunity to work in this city, then you have more chances to work with famous artists, and therefore increase your income.

We briefly told you what roughly the path can be from a beginner to a successful producer working with stars. You need to be patient and try to get the most experience, first of all, and also get to know more. Sometimes you should even neglect earnings in order to gain new knowledge – at the initial stages, this is a more valuable asset than money.

Keep learning and leveling up, making the most of the opportunities that arise. You never know what project or conversation can drastically affect your destiny.

If you already have a basic knowledge of producing and want to practice, and perhaps even get the first money for creating music, you can use freelance sites where artists of different levels are looking for producers for themselves. The cost of the work can be anywhere from $ 100 to $ 1000. For the start of a career, this is a good simulator.

If you are a more confident producer and have written several tracks, we invite you to our site, where producers write music and send tracks to our catalog, and after their sale they receive money. At the same time, your earnings are not limited and you have complete freedom in the daily routine, work when it is convenient for you. Join us!