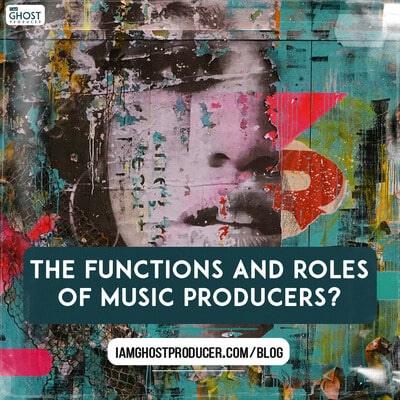 The Functions and Roles of Music Producers

Music production consists of several steps that allow you to deliver the music to the listener. Every musical piece you know or admire exists only because it transformed during the production process.

Professional music production requires specialized skills and experience. This applies to both technical and creative aspects. In addition, it requires effective skills in managing different processes in the project.

To be a producer or music producer means several things depending on the music genres and methods of work.

To be a producer essentially means leading and managing both the creative and production processes. While such involvement may vary, producers play a key role in preparing the ready-made musical product.

Music (record) producers assist the artist in his project, bringing his ideas to life. You can’t touch or see things the producers have done. It’s not at least an object. To make it as clear as possible: a music producer earns money by forcing air molecules to vibrate so that person feels something when those molecules collide with him.

What are the roles of music producers?

The roles of a music producer can be summarized by saying that he finds out the best in an artist. This can be achieved by developing good relationships with the artists, helping to make the recording process more enjoyable, efficient and productive. Usually, such interaction results in a better recording.

Sometimes it means that the producer remains in the studio together with the bands in order to help them get their songs onto the record. Sometimes the producer is more involved in the recording itself, as well as working with engineers. Moreover, some producers may even create instrumental parts for the artists. Thus, as you can see, the role depends entirely on the performer.

The daily routine of a music producer involves setting a studio up. Then he meets the artists and their management and record label. The producer can also be in charge of the session musicians and even manage in the studio.

The producer often starts recording sessions with the engineer. While the engineer pays more attention to the sound quality, the producer gives individual attention to the artist. Furthermore, he makes decisions whether the takes are good enough. Also, he could decide if certain harmonies or arrangements should be added or removed. Another way for music producers to become part of the songwriting process is to work as co-producer.

A co-producers: who are they?

When you participate in a project as a co-producer, you will not only receive a portion of the money for that project, but you will also gain experience in working with a client. After you have worked as a co-producer for some time, you will be able to better understand the needs of consumers and listen to a large number of songs from various musicians.

A producer differs from a co-producer in that he transforms the task at hand into a musical form. While the co-producer listens to the received songs and provides feedback on each of them.

What is peculiar about the producers’ job?

The tasks that a music producer undertakes can be completely different. Many of them are far from the process of making music. The person who creates instrumental beats can be a producer. Likewise, a producer can also be a person who is involved in signing contracts with musicians for record labels.

We would like to highlight several main roles of music producers.

First, you need to make a plan according to which the recording process will be carried out. It is also important to take into account the project budget, for which the plan will also be adapted.

The next key aspect is to transform the original song material into a complete recording. This feature is both artistic and commercial. The music producer must realize the full potential and intention of the musician in the future recording, as well as achieve the success of the song on the part of the audience.

The producer must create all the conditions to get the best results from everyone involved in the songwriting process. At almost all stages of producing, one of the key roles is played by the music producer and the result largely depends on him. In addition, he must understand and feel if each instrument was recorded correctly, and then continue working or rewrite the instrument until the desired sound is achieved.

The music producer must find a balance between the creative elements of the process and the tasks that his work requires, including commercial, etc.

First, you need to determine and write down what result needs to be achieved and what is needed to create the right atmosphere. Of course, every professional knows what to do, but if you keep the whole plan in an abstract form in your head, then at some stage you will definitely be able to deviate from the planned plan.

What is the process of making music?

A finished song product consists of an idea and how those ideas are presented in the form of recordings of instruments and their arrangement in the project.

The necessary steps in creating a song:

To become a professional producer, you have to learn a lot and spend a lot of days practicing. You can start as a producer assistant so that you could help your boss with different tasks. Later you can try your hand as a co-producer of tracks. Having gained enough experience, you will definitely have a chance to become an independent professional in this field. Learn and keep practicing.

We hope you liked the article. If you are a producer and want to sell your tracks, go to the Become a Ghost Producer section and share your feedback

And if you are a DJ and want to buy tracks, go to our Ghost Production Shop.