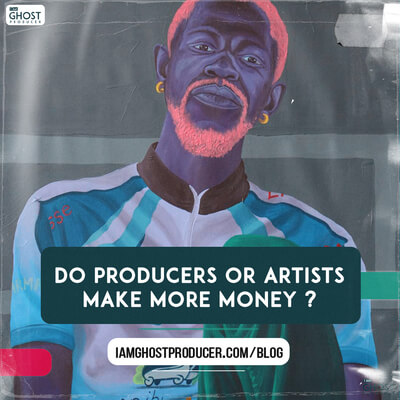 Who earns the most currency: artists or producers?

We will immediately give an answer to this question and then tell you all the details: why everything is arranged this way.
Anyway, artists still earn more than music producers, because they receive a higher percentage of royalties. Besides, they have unlimited methods to monetize and capitalize on the record to earn more cash. A music producer relies on a performer in order to make money. Once the recording has been made, the producer can only agree on the percentage of specific fees, on the other hand, the artist will be preferred and given more than one opportunity to receive income.

Why do the first ones earn more than the second ones?

Producers deal with technical parts and production elements are at a disadvantage, when it comes to revenue. Producers who have a chance to earn more – these ones, who are trying to properly brand themselves, to no longer be secondary guys “players” and to be in the spotlight, in order to be able to attract more clients for business.
For artists and directors, the fan base is the clientele that supports the music financially. They are usually huge, which makes artists earn more, because they may demand a higher royalty rate while giving the producer a minimum rate. In this case, the music producer will be employed, which is usually restricted to a one-time upfront payment and a minimum royalty rate or no royalty rate at all.

Music producers find it hard to monetize audiences because they are more interested in the artist and the music. Hence, direct monetization becomes a problem, if the producer can’t come up with ways to make money from their followers. In most cases, this can lead to the creation of products for other music directors: these are sample packs, plugins, goods, etc. At least in this way, the producer can take advantage of his fans, to make some cash.
Is it true that the producer will benefit from people buying music, made by artist, but, in fact, it’s an effect that comes from an artist’s audience supporting their music. The traditional producers’ income is exactly dependent on their ability to make music, which gives rise to monotony. On the bright side, a musician can monetize his craft in different ways, even outside of music.

Let’s take a look at the various income flows, which artists use to increase their earning power.

Artists always have the advantage of making more money than the producers, because they can easily scale their brand to enter other territories and increase earnings. Producers rely on artists as their main clients for whom they can work.
Artists can always engage and collaborate with companies, who use the artists’ achievements to attract new potential customers for their products. Companies increase brand awareness of their products, using an artist’s brand that is already well established and well known.

Another area in which artists can earn more is function, besides music sales and licensing. Artists usually charge an advance payment from anyone who might want to include them in their recordings. Facilities work well for artists because they can bring them more money, and also let them attract a new fan base.

It is another way that artists can benefit from their brand and make more money. A product may be clothing that can be branded by an artist name to sell more. The products are mostly related to music, therefore they can be sold much faster because of the added value that the product is.

That artists earn more and have more revenue streams does not mean that producers earn a bit. As a track made by a producer takes off and becomes popular, the cost of the producer’s work, who worked on the hit, increases significantly and many well-known artists want to work with him. Such a producer will always be in demand and receive decent pay for his work. At the same time, he is focuses on his favorite hobby, doing only what he really enjoys.
But these producers do not become immediately as such. They have a lot of experience in music and collaboration behind them. Novice producers can also get decent pay for their work pretty quickly. For example, on our platform, producers can upload their own music and get paid after their track is purchased. If you are making music and feel confident in your abilities,join usand start earning as a producer!