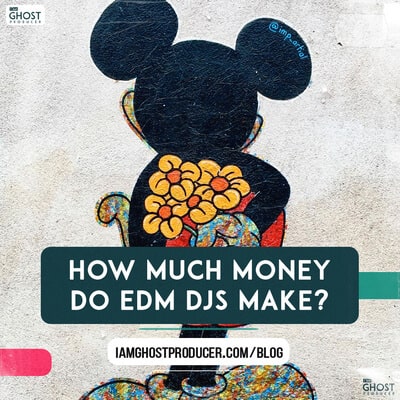 How much Money do EDM DJs Make

Sooner or later every DJ starts wondering how much famous DJs earn and why do they get paid so much? I mean, let’s be honest here, every rookie DJ wants to become popular, make a lot of money, and live his dream life.

Most electronic music producer salaries currently range between $31,000 and $80,000 with the highest earnings of $104,000 per year in the United States.

The amount of an artist’s income depends on many factors. The average DJ earns $250 or $300 per night playing a 4-hour set in a mid-size town in the US or UK.

There are a number of factors that affect a DJ’s earnings:

Which DJ gets paid more?

Famous DJs have main ways of making money: performing, sponsoring, etc. The stars of the electronic scene receive $ 5 million a year and even $ 10 million. We have compiled for you a list of artists who have received the most over the past few years.

This DJ, originally from Scotland, worked as a young man in a factory to buy his first equipment. Then he started making music and eventually signed his first contract. Today he is the richest among DJs, and his fortune is $ 300 million.

Muscular and tattooed DJ, originally from Italy, he looks great in his years and is known for his lifestyle. Its capital is $ 200,000,000.

When this dutchman was a teenager, he was a DJ at parties at school, and after a while, he was already able to play in clubs in his country. In 1994, his career took off with the release of his own music. It grabs third place with $ 170 million in the capital.

American Aoki has released several albums, one of which was even nominated for a Grammy. He has his own charitable foundation to raise money for humanitarian aid. in 2021, his fortune is approximately $ 95,000,000.

To this day, he remains one of the most famous and recognizable DJs in the world. When he released his first album, “Just A Little More Love”, he hit the charts at the time. The artist’s fortune for 2021 is estimated at $ 75 million.

Why do DJs make so much money?

The most famous DJs are able to bring a large number of people to their performances. In stadiums and large concert venues, all seats are sold out. Performing and festivals are a major and significant part of their big income. All this is due to the fact that they became famous. Touring is the main source of income. Selling tracks doesn’t make a lot of money for musicians today.

So why do famous DJs get paid so much money?

It’s simple. The greater the demand for a DJ and the larger the festival, the more the DJ will earn. Some might say that DJs are paid so much money undeservedly. If a DJ has a lot of fans and is willing to pay for a ticket, the DJ will receive a lot accordingly.

Actually, it’s all about the artist’s ability to use his fame to fill an entire stadium. A lot of DJs gained it because of their music. One of the best opportunities to become famous is collaborating with big artists, so DJs take advantage of this opportunity.

Sometimes a DJ releases a track that is not as good as the rest of his hits. In this case, the DJ needs to be a good artist in order to capture the mood of the audience, provide them with remixes of famous tracks and create an atmosphere on the dance floor. To get good money for your work, you need to give the public what they want to hear.

If you are a DJ, and you want to build a successful career, you should write your own tracks and release music under your name. Even if you don’t have any experience in making music, you can always use the Edm Ghost Production Shop, and sign ready-made tracks to the label under your own name. It will help you to grow as an artist.