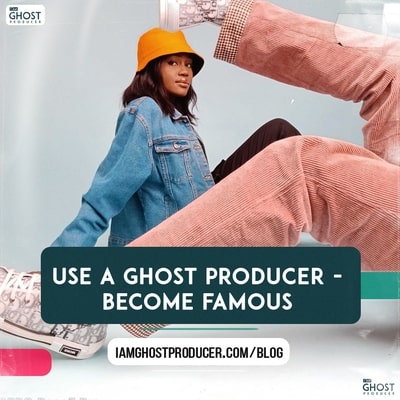 How using a Ghost Producer can help become famous

Every artist’s dream is for their track to be heard by thousands for it to be released by a well-known label. Artists work hard in their studios in order for this to happen. It takes them weeks and even months, sometimes years. Very often an artist simply lacks the skill, experience, or even patience to produce a track or an album that will make the artist famous.

For example, you can successfully perform as a DJ and even write your own music, build up your brand and marketing well, but this does not make you as famous as you would like to be. Even famous artists use ghost producer services for this reason. Let’s see if you should hire a ghost producer and how it might affect your career.

What is the benefit?

People often say that using ghost producers destroys the spirit of the music, as fans are tricked into believing that their favorite artists are responsible for the music they release. Proponents of ghost production state that it can help established artists create a steady stream of new and relevant music. This allows artists to match the ever-changing tastes of their fans. The long-term value of superstars is considered to be more important than the actual music they put out. Artists who follow the latest trends usually stay successful longer making the competition inside EDM even more severe.

Many successful artists and DJs have moved away from the sound they used to create. Some artists can easily switch between genres, but it’s not an easy task for the majority. Hiring a ghost producer will definitely help you change your sound. Some producers have mastered the art of making big hits in certain subgenres. If they are released under your own name, it can help you stay relevant in the ever-changing music industry.

Maarten Vorwerk is a Dutch dance music producer who has been working on stage for several decades. His first success came to him when he started putting out hardstyle releases. He produced under different names and genres, and afterwards he switched to making music for EDM DJs like Quintino, Major Lazer and Like Mike.

In an interview for We Rave You, Maarten emphasizes that everyone who contributes to the track should be recognized. Years ago you could just check the back of a CD for credits, but now it’s a bit more difficult. Martin also mentions that people can get confused or feel tricked when they find out that their favorite artists aren’t making their own music. However, you should also understand that superstars like Rihanna do not produce their own records.

Ghost production is seen as a result of the demanding and ever-changing music industry. DJs and artists are constantly being pushed to releasing new tracks that match the tastes of their fans and sticking to a strict tour schedule at the same time. Hiring a ghost producer can definitely resolve some of these difficulties. At the times when it is much more difficult for an artist to stand out from the crowd they get helped with mixing, song making or extra production. So, isn’t it in everyone’s best interest to collaborate with ghost producers if it helps improve the sound of the final recording?

A deal with a ghost producer can be arranged in a number of ways. A track can be made and then sold by a ghost producer for a certain fee. Another common case is when the main producer specifically involves a ghost producer to create their vision. This method might also lead to co-production. In this case the producer who takes responsibility for the track has a big influence on the finished product, but still can’t produce it alone.

There was a time when audience did not realize that music could be made by a ghost producer. People believed that every track released was made by the artist alone. This lack of knowledge about ghost production caused a stir when the first pieces of gossip started emerging and going around. Maarten Vorwerk was the center of this controversy. This producer was secretly behind many of the most famous tracks in the industry. When Vorwerk’s ghost production was no longer a secret, it changed fans’ attitudes towards artists and negatively affected many of the industry’s top names.

This period was full of doubts for both fans and artists. Fans were not sure whether they could trust their idols. Artists were not sure whether fans would shy away from them if it was known that they had been using ghost producers to make tracks. This caused a lot of negativity in the industry. But the situation has changed over some time. Despite the negative publicity at the beginning, using ghost producers is no longer taboo as it used to.

In the present climate, a huge number of artists have used ghost producers or worked with co-producers to bring their creative vision to life at some point. At present listeners do not have a choice anymore, but to accept this as a new norm, because without ghost producers, the industry would be in a completely different shape and many top chart hits would be missing. These days it is believed that artists are humans at the end of the day and they often need help when their careers reach a certain level.

Can someone use a ghost producer to become a famous artist?

Yes, for sure. But this is clearly not literal. And it doesn’t mean that you will become famous 100% if your hired producer makes music for you. But first of all, such a specialist is still a producer, even if they are anonymous. If you hire a professional, especially someone with a track record of producing successful tracks, you will benefit from it. If these tracks helped another artist gain momentum and take their career to the next level, then you get the same chance, don’t miss it. Of course, you will have to do a good job promoting your track, but a good product might be easier to promote and has a greater chance of success.

If you want to get a track from a ghost producer as quickly as possible, buy ready-made tracks atour online store. You will definitely find the one that you like among hundreds of tracks in different genres, and you can start promoting it or submitting it to a label right away.