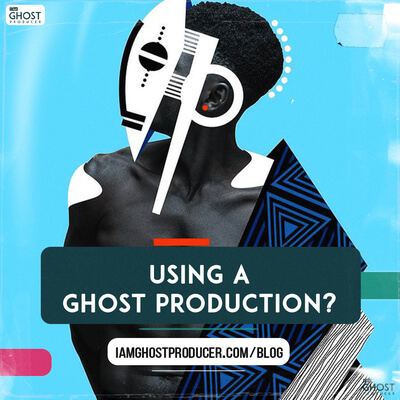 Using a ghost production service: why is it a good idea

Look at the modern pop artists: many of them are just the performers of songs, Though different people are engaged in writing poetry, music, mixing and producing compositions. It is absolutely normal practice for any artist to use the services of several specialists, including ghost producers.

As for the earlier mentioned artists, the descriptions for their songs usually indicate the names of the musicians and other people who participated in the creation of the song. However the information of a ghost producer is not indicated as the poetry or music are considered to be created by the artist himself. For example, this concerns the case when an artist used a service of ghost producers (such as ours), purchased a ready-made track and received all commercial copyrights to it.
Such a plan is frequently used by electronic music DJs. They hire an EDM ghost producer for making tracks and later sign them up with the artist’s name and publish it on the label.

Why do DJs use the service of ghost producers?

DJs use ghost producers for several reasons. Some prefer to perform on the stage, while others hire ghost producers to give freshness and originality to their repertoire. Besides, in most cases DJs produce music together with ghost producers.
It’s a normal practise for DJs to delegate production responsibilities to another music producer in order to focus primarily on performing.
Thankfully to their success, some DJs don’t even find the spare time to make music.
DJs use ghost producers’ service in situations where they are looking for changes in their sounding to refresh it a little and make their music different from other DJs.

Why should I think over the idea of hiring a ghost producer?

We have made a list of main reasons why one should use ghost production service:

There is no spare time to make music tracks

If you don’t have appropriate skills to create music, it might make sense to hire a ghost producer professional who knows exactly how to transform your ideas and make a track according to your preferences and intentions.
Such producers are experts at realising your ideas into a complete musical creature.

There is stagnation in creativity

From time to time any of us runs out of creative energy. But it is more than enough to invite a new person with different experience and a bunch of knowledge to stimulate new fresh ideas. You will not even notice how the music making process recovers with new energy.
For example, well-experienced ghost producers are aware of how to work with some of the most famous personas in the music industry and what techniques to use to attract the audience’s attention.
Sometimes you just require prosperous cooperation with a strong producer in order to make your music sound in a better and fresher way.

You have little experience in making music

While you are not a strong music maker yet, working with a ghost producer is a great idea to get your music up to a good level faster and gain new experience at the same time. You don’t have to necessarily buy ready-made tracks and publish them at once. In such a way you will not have fortune. When you hire a producer, you express all your ideas, thoughts, look for and listen to references, as a result you have already been forming the basis of the future music piece. Then, with the help of the creativity and technical skills of an experienced producer, your idea is brought to life. Besides, during all the process you learn and get new skills. An irreplaceable experience!

You have a big current project

Of course, I wish everyone would have large, great projects in the future. And behind such big projects there is a lot of work by a big number of people. Therefore, if you are lucky enough to be engaged in a large project, you may face the fact that you definitely cannot cope on your own. So it is high time to hire more professionals including ghost producers.

Imagine the situation: you are eager to make a real masterpiece. And to create a complex part, for example, a violin, the capabilities of a virtual studio are not enough for you. A producer who makes the music pieces as well as can play an appropriate instrument will help you with that. After successful coworking, your track could sound incredible.

The advantages of using the ghost production service

It helps to save time

That is one of the obvious benefits. As it is one of the key elements at any steps of an artist’s development. Such a service will help a beginner, who is out of knowledge and experience in producing, to start releasing his own music tracks and increase his publicity.

It helps to save money

Recording and creating music requires a studio and equipment, which costs a lot of money. Therefore, if you are not rich enough to own your personal studio so far, you can use a rented one. But keep in mind: it also requires funds and the studio may not always be available to you. As a result, the opportunity to hire a guest producer or purchase aready-made trackscomes to your rescue again.

It helps to keep your fans engaged

Your fans are eagerly awaiting new performances, mixes and of course new music pieces from you. Regular announcements of fresh tracks keep your fans intrigued and attract new ones. If an artist has an established promotion process, with the release of each track, there is a lot of activity on all venues where the artist is presented and promoted. This gives a good increase in new audience and, of course, allows you to please and keep your current listeners.

To sum it up, the need for the services of a guest producer depends on your current situation. The score of ready-made tracks is all at your services if you are just starting out as a DJ and you do not have a lot of funds and skills to create your own music, but you are willing to release your own music tracks and promote yourself with their help.
If you have a little experience in producing, you can hire a guest producer professional and create a custom track. Thus you gain additional experience, maximize the ability to get a track close to your ideas and expectations, and also not spend a lot of money on the studio.

If you are already an advanced artist, but you still cannot make your own music, or you simply don’t have time for this, then delegate this task to the guest producers. So that you can devote most of your time to performing and developing yourself as an artist. Choose based on your current step on your career path and save time, because it is an irreplaceable resource.